So, a week passed and I felt like I was becoming part of the furniture at Calvary Hospital but we were excitedly waiting for Sunday evening to arrive when I would be induced… Steve had always said that if we could get to 37 weeks then we would try for a vaginal birth any earlier and it would have been a caesarean.  As sick as I had been, Mini Mac was doing fine but in the past few weeks had really stopped growing which is why  I was being induced.  We had discussed the birth and whether or not I wanted drugs and an epidural.  This is such a personal thing and every woman is different but for me my answer was straight up “Yes I want the drugs I have a very low pain threshold.”

The Sunday arrived and the midwives came and got me around 4pm and took me to around to the delivery suite and Steve arrived around 5.  He talked me through what was going to happen, did his examination and then I was induced by using a gel which softens the cervix to bring on labour and had a controlled-release pessary inserted, which basically felt like a tampon.  Steve’s last words to me were “Nothing is going to happen tonight, I will see you in the morning!”  He joked how he was going out for dinner so don’t go into labour.  I started getting the first bit of pain within an hour, it just felt like period pain and was more uncomfortable than anything and I had to be careful when going to the toilet that the pessary didn’t fall out.  By 9pm the pain had gotten worse, so the midwives gave me some panadol, sleeping tablets and told me to try and get some rest.  I managed to get a few hours of broken sleep before I rolled over onto my back at 1am and felt a pop.  I called the bell and said to the midwife this is really embarrassing but I think I’ve wet myself… She replied with “Umm no dear your waters have broken.”  Jus was asleep on the fold out bed next to me so I tried to wake him up while the midwives stripped the bed and cleaned up my mess. 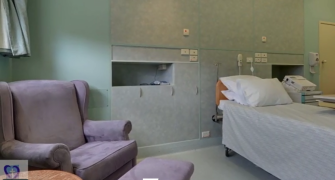 The next five hours were spent in and out of the shower, for me this is where I felt most comfortable, there was something about the water running down my back when I was having contractions that seemed to help.  Contractions really are something that you can’t prepare for… The pain is something else and as much as the midwives try to tell you to breathe through it I was constantly trying to hold my breathe and clenching until it passed.  I tried the gas however this didn’t seem to help at all and by the time Steve walked in at 6am I was leaning over in the shower vomiting, a lovely view for him I am sure, but nothing he hadn’t seen before.  He asked me what drugs I had been given to which I responded in a crying voice “PANADOL.”  He seemed quite shocked “You told me you didn’t deal with pain” he said to which I screamed back “WHAT ELSE COULD I HAVE HAD???”  He gave me a smile and said “Get this girl some morphine and organise the epidural.”  I wasn’t aware that all I had to do was tell the midwives I needed stronger pain relief and I could have had it but was proud of myself for getting this far without it.  I was constantly being monitored to check Mini Mac’s heart rate was fine and that everything was progressing as it should be.

The morphine seemed to work quite quickly and before I knew it the anaesthetist was by my side trying to find a vein to give me the epidural.  Next thing Steve walked in and said “STOP, babies heart rate is dropping and we need to get them downstairs immediately for a caesarean.”  At this point I was actually grateful for the morphine as I was calm and not completely aware what was going on.  We got downstairs, Jus put on his scrubs and I was given a spinal block,  I lay there looking at a big blue sheet knowing it wouldn’t be long before we met our little miracle.  The feeling of a caesarean is still so bizarre to me, you are completely numb and cannot feel a thing however you can feel a slight tugging

as they are getting baby out which just feels so odd.  The next thing I knew my son was handed to me and laying on my chest… Yes it was a boy!!!  Tears ran down both mine and Jus’ face and the midwives asked if we had a name, Jus immediately said “Noah Leo.”  They asked if Jus wanted to cut the cord, he was already a bit unsure but as they asked he caught a glance past the sheet and at my stomach (parts still in pieces) and was a bit nauseous.  We didn’t really take any photo’s throughout the labour however I am now so grateful for the midwives taking photo’s of Noah’s arrival and the first few moments we shared together as a family of three. 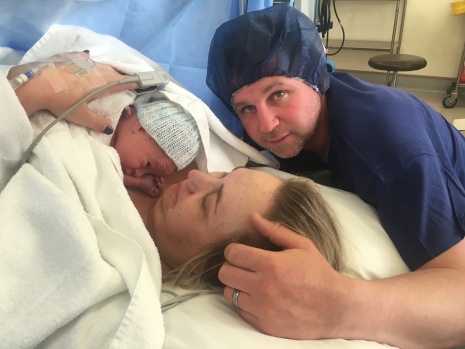 Noah Leo it was and he was just perfect… I was wheeled to recovery where we both just stared at our new baby boy.  One of the nurses commented to me “Is this your first child because you are very relaxed” I laughed and said “Relaxed, I am just tired, exhausted and still a big drugged up.”  Steve also told us later that they had got me to theatre just in time as the umbilical cord was around Noah’s neck which was what was causing his heart rate to drop.

So that was it… The 22nd of August 2016 the day our lives changed forever and we became parents. 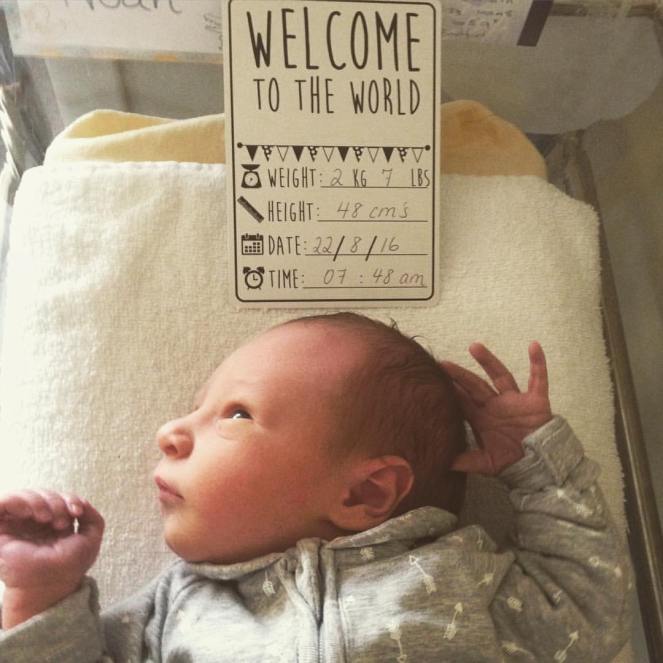 View all posts by makingminimac